A word of special thanks for your outstanding speech for our association. The compliments are still coming in from the membership. It takes a special talent to appeal to such a broad cross section ... Your humor, motivation and information was exceptional. Surely the best this organization has ever experienced.

I know I can speak for everyone at the luncheon, your message on being the best you can be, was terrific and very well received. Your words were very motivational and you touched our hearts with your stories of courage and commitment.

I'm sure you already know this, but you made one heck of an impression at the Cal Aero Expo in Pomona...

I was very, very impressed! You have a wonderfulway of contacting each and every person in the audience. Your sincerity and personal conviction are readily apparent. It's not often that many people get a chance to listen to a real, live American hero. And if there is anything we need more of in this country, it's people like yourself letting others know what's possible in their lives.

I LOVED how Gen Ritchie began by challenging us. Even if you were skeptical it caused you to naturally want to listen ti what he had to say. His message of why we do what we do was empowering and made me proud to wear the uniform. However, when his wife came up and spoke, that added an element that absolutely nothing the General could have said would add. To listen to his wife who actually lived under communist oppression speak about how America gave them hope, inspired me. While little girls in America dream of Prince Charming, little girls under oppression dream of American Pilots who will rescue them. I don't know if I could more concisely describe why it is important that we do what we do. In a sentence she validated our entire military and whether she meant to or not paralleled the war on terror.

Your speech was not only uplifting and inspiring, but it was one that left us with a renewed appreciation for our men and women in the Armed Forces and what it takes to become a true leader. The added bonus of having Mariana share her inspirational story of how she escaped from communist Romania with nothing but a bag of clothes, and how grateful she is to the United States of America for the opportunities she has been blessed with, was something that truly captivated the audience and reminded us how luck we are to live in such a great country.

We met at the American Veterans Conference in Washington DC. I can't tell you what an honor it was to hear you speak. Your talk and that of your wife, Mariana was in my opinion the highlight of the event. Very powerful.

Norman Fulkerson, The American Society for the Defense of Tradition, Family and Property. Author of the book "An American Knight".,

Having attended numerous WAMA meetings over the last 18 years, I can unequivocally say that this was one of the most interesting presentations ever given to this group. I am certain that my thoughts reflect the feelings of all those attending.

You honored us by being our Keynote Speaker at the Synthetic Turf Council’s 10th Anniversary Celebration and Annual Membership Meeting.  Mariana was the cherry on top!  You both must have sensed as I did that there was a strong and instant connection between you and the audience.  It had a lot to do with your remarks and what they revealed about you as a human being, as evidenced by Enrico Buriani’s remark that you spoke of things that mattered to him, but from a perspective that fascinated him.  But the connection also had a lot to do with our shared conviction about what it means to be an American.

Your presentation was dynamic to say the least; right on target and something we all need to reflect and act upon. Your message on duty to family and country is so important. If we have hope for the future of our country, we must wake up and smell the coffee, then do something about it. Thanks for what you do. And please keep it up. You have our highest praise and admiration.


All of the Congress attendees were quite impressed with your comments, your conviction and your class, and you certainly have a strong message about commitment, loyalty and attaining goals. And that's exactly what we wanted conveyed to our people! You are very easy to work with; you do exactly what you say you're going to (including doing your homework about the company and its people); and you have real substance in your message.

Some of the fine organizations to which we have been honored to speak.

Because there are positive roles models too!

Gen. Stephen Ritchie, the only "Ace" Pilot of the Vietnam who shot down 5 Russian Mig-21s.

Another piece of living history and a highlight of the conference as well, was the presence of Gen. Steve Ritchie, one of the most highly decorated pilots of the Vietnam War. After distinguishing himself on his first tour of duty in Vietnam, Gen Ritchie volunteered for a second tour in 1972 and earned a place in aviation record books that will likely never be equaled.

On May 10 of that year he shot down a Russian MIG 21 and then another on May 31. Weeks later he engaged and destroyed two more MIGs in a classic low altitude dog fight which lasted just 89 seconds. On August 28 he shot down a fifth MIG during his 339th combat mission making him the Air Forces only “Ace” pilot since the Korean War and the only American pilot in history to down five of the most sophisticated air craft in the North Vietnamese fleet.

His list of accolades is simply astounding. Besides receiving the Air Forces highest award –the Air Force Cross– he went on to earn four Silver Stars, ten Distinguished Flying Crosses and 25 Air Medals. Before his career ended in 1974 he had logged more than 800 flying hours.[7]

During his talk he illustrated all to well that he knows the enemy at home as well as the enemy he fought abroad.

“Never have we, in America, faced such a dangerous threat,” he said, “which is determined as never before to either convert us or eliminate us and we are not even allowed to say the name of our enemies.”

“They can saw off our heads and put it on television all over the world,” he said, quoting the conservative radio commentator Paul Harvey, “yet we have to tiptoe around their sensitivities.”

“Whether we like it or not,” he finished, “we are in combat and it is a war of good vs evil, right vs wrong, freedom vs slavery, civilization vs chaos.”

Mariana Ritchie describing the hope she derived from a picture of the American Flag at the 14th Annual Veterans Conference, Washington DC. (Photo Courtesy of Chris Graham.)

The Little American Flag: Hope of a Romanian Girl

After thrilling the audience with his adventurous war stories and inspiring them with his perspectives, he turned the microphone over to his Romanian born wife Mariana. She briefly described what it was like, as a little girl, living under Communism in her homeland. As a five-year-old she remembered having to wait hours in line for such basic things as bread or even water. The word God was not allowed and although her grandfather was a priest, she was threatened for going to church.

The number one enemy of the Communist, she told the audience, was America. It is for this reason that she had hopes of one day being rescued by someone from the United States. One day she saw a picture of an American flag inside a magazine that had been smuggled into the country. She cut that picture out and drew enormous comfort just looking at it.

“I used to take it out and stare at it for a long time,” she said, “sometimes for hours. I was dreaming about America and what it must be like to be free.”

One day she decided to take her flag to school, where children were subjected to Communist indoctrination, and got caught. Although the teacher was furious and threatened to punish Mariana for having the flag, they could not find where she hid it.

“I could afford to lose my life,” she continued, “I could care less. But one thing I could not do is go on living without hope and that little American flag was all I had that kept me going.”

Her dream was that American pilots would go to Romania and blow it up, level it.

She finished her words by thanking America for everything, including a “second chance at life,” but also for “giving me a home and teaching me new words like happiness, honor and kindness.”

Whereas most little girls dream of a knight in shining armor, riding a white horse this Romanian girl’s ideal was clearly a twentieth century version. “I dreamed of an American fighter pilot who would rescue me with his fighter jet,” she said, “and take me to America.”

Prof. Plinio Correa de Oliveira, founder of the Brazilian Society for the Defense of Tradition, Family and Property (TFP)

Those Who Fight for Freedom

This burning desire for freedom of a little Romanian girl, left unheeded for years, reminded me of a favorite phrase from a stirring manifesto written by the “Twentieth Century Crusader,”[8] Prof. Plinio Correa de Oliveira titled, Communism and Anticommunism on the Threshold of the Millenium’s Last Decade.[9] It was a scathing denunciation against those in the west who remained silent about the millions of souls languishing behind the former Iron Curtain.

In it, Prof. de Oliveira described the discontent of those people in countries like Romania and what they would say when it came their time to time to speak. He imagined them questioning Western Historians who “wrote optimistically and superficially about what was happening in the Communist world,” yet chose to say so little about the immense misery. Or the wealthy public figures of the West who did so little to free them from the “dark and endless night of Soviet Slavery.”

“We needed a Crusade to free us,” Prof. de Oliveira imagined the discontent saying, “and you merely sent us some bread to help us endure indefinitely our captivity. Perchance were you ignorant that the best solution for captivity is not merely bread, but freedom?”

That is the reason why, on this Veterans Day, we should remember all those American servicemen who, like modern day crusaders, fought and continue to fight for the defenseless. They do not remain with crossed arms in the face of so much infamy but put their lives on the line, time and time again, for those who are often abandoned by the rest of the world.

This no doubt is what led Mariana Ritchie to finish her discourse with something that seldom makes it into print, but needs to be plastered on the walls of every newspaper office in the country.

“You are not hated, like some people like to say. You are loved by millions of people who are hoping that someday you will go and rescue them next.”

for an upcoming speaking engagement, please call 206-856-8485 or click here  to email us directly from our website. 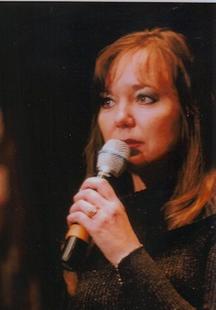